Louise Manzo McKaig and her family have a rich Santa Barbara history built on innovative businesses, entrepreneurship, and community involvement.

Born Louise Manzo in Santa Barbara California to mother Dottie Monzo and father Pete Manzo, also known as Enrico Manzo, Louise’s family has lived in Santa Barbara since 1915. Her children are 5th generation Santa Barbara locals and work both locally as well as in the Hollywood entertainment industry. Her husband Bruce McKaig grew up in Santa Barbara and is a long-time firefighter, recently retired, with Santa Barbara County. Both of their families have been behind the formation of some of the most prominent businesses to ever come out of Santa Barbara and Montecito such as Casa Flores Tortillas, Pan American Markets, Enrico’s Italian Deli, The Italian Store, Sambo’s Restaurant chain, The Santa Barbara Zoo, and more.

Before branching out and starting her own businesses, Louise McKaig had the opportunity to work alongside her father Pete Manzo at his grocery store chain, “The Pan American Markets” along side the rest of her family, mother Dottie Manzo and brothers Louis Manzo and Mike Manzo. She was able to learn about business and running a successful company at every aspect, from stocking shelves as a child to motivating employees and finding ways to create happy customers. Soon after they built one of the first stores to have its own deli placed within a grocery store called Enrico’s Deli.

When Louise Manzo McKaig turned 17 years old, her family began a successful tortilla manufacturing company called Casa Flores Tortillas. Louise Manzo McKaig once again was able to work alongside her parents gaining experience as the family grew that business into one of the fastest growing companies in the Western United States with over 100 employees and numerous distributors. During this time Louise learned all about the operations that go into making a large company run and also came up with the idea of the first honey-wheat tortilla. When Mission Tortillas bought the company, Louise’s family moved back to Santa Barbara run Enrico’s Deli and turned it into one of the most popular deli stores in Santa Barbara.

While managing Enrico’s Deli, Louise developed a love for the food industry and for creating new and innovative food products. She began studying healthy food styles and branched off from the family owned businesses to start the very first company of her own, a health conscious, catering company for large parties and events.

Soon after Louise began a successful international learning program that hosted all types of international professionals like CEO’s of major companies, professional basketball players and athletes, Japanese bullet-train conductors, and executives at Johnson & Johnson. After the September 11 attacks, travel stopped and most international programs came to a halt. Louise and her husband sold their house and set out to design and build their dream home in the Santa Barbara foothills, near the location that they both grew up. Sometimes it can feel like your goals are not as important to your real estate agent as they are to you. Louise was confronted with that and her entrepreneurial spirit kicked in. 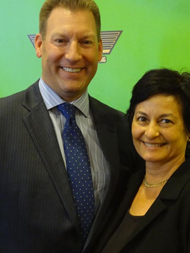 Seeing the need for ethical, experienced, and innovative business practices, Louise McKaig renewed her real estate license from 1984 and set out to make a difference in the real estate service in Santa Barbara & Montecito. Louise McKaig has created a high-end real estate team that focuses on providing clients with top of the line marketing for their homes, well trained negotiating tactics, ethical and professional business practices, and an approach to each transaction from an investor or entrepreneur’s point of view. What that means is that our team focuses on helping you achieve your goals and help you keep more of your money.

Louise McKaig with Best Of SB Winner Certificate sent by the Independent.

Today Louise McKaig can be seen in various publications and was recently voted Santa Barbara’s best real estate agent by the readers of the area’s most popular local newspaper. She has been acclaimed as one of the top real estate professionals in news outlets, and by investors and clients alike. Louise McKaig also teaches professionals around the country as well as speaks at business seminars on how to build a successful real estate business, how to create long-term client relationships, and how to buy or sell in luxury real estate markets.